Transcriptions of Samuel SMITH's 1799 and 1813 deeds concerning the establishment of the East Blackstone Quaker Meeting House.

These are my transcriptions, prone, as usual, to my errors. The original spelling, punctuation, and line formats are all preserved. Superscripting is not preserved. Questionable words are enclosed by square brackets; if better eyes than mine can get a word that I couldn't, please contact me.

The original documents are on microfilm at the Worcester District Registry of Deeds and are also available as digital images via the Massachusetts Registry of Deeds. They are not indexed, so you need to know the book and page numbers: 1799 deed, book 138, pp. 355-357; 1813 deed, book 190, pp. 103-104.

To all people to whom these presents shall come I Samuel Smith of Mendon in the County of Worcester and State of Massachusetts Bay Yeoman send greeting Know ye that I the said Samuel Smith for & in consid eration of nine dollars by me in hand well & truly paid by Rufus Smith of Gloucester & William Buffum and George Arnold of Smithfield each in the County of Prov idence & State of Rhodeisland Yeomen as they are Agents for the Society or body of people called Quakers the said nine dollars being the proper monies of the said Society the receiving of which I do hereby acknowledge & myself therewith to be ful ly satisfied contented & paid & thereof & of every part & parcel thereof do exonerate acquit & discharge the said Society & their Successors forever by these presents have given granted sold conveyed & confirmed & by these presents for myself & my heirs do fully freely & absolutely give grant bargain sell convey & confirm unto the said Rufus Smith Will iam Buffum & George Arnold & to their heirs a certain piece or parcel of land lying in the Mendon aforesaid on the road which runs from Mendon to Providence & part of the farm on which the said Samuel now liveth Beginning at a heap of stones on the Westerly side of the highway and a little Northerly of a cross road between the land of Seth Kelley and the land of the said Samuel Smith thence running West twenty eight degrees South nine rods then South twenty eight degrees East nine rods then East twenty eight degrees North nine rods to the first men tioned highway then with said Highway nine rods to the first mentioned bound containing half an acre & one rod To have & to hold the said piece of land with the appurtenances privileges & commodities to the same belonging or any wise appertaining thereunto to them the said Rufus Smith William Buffum & George Ar nold their heirs forever upon trust that the said Society of people called Quakers shall have take & receive the whole profits use & improvement of the said piece of land with all its appurtenances in all time to come & that the Society & their Successors always hereafter shall order di rect & govern the use & improvement thereof in such way as to them shall seem best for any public use or uses of the said Society in the method & after such manner as is usual & customary for the said Society of people to govern direct & manage their temporal prudential affairs but shall not appropriate the said piece of land or any part thereof to any private use or purpose whatsoever And I the said Samuel Smith for myself [my?] heirs executors & admin istrators do covenant promise & grant to & with the said Rufus Smith William Buffum & George Arnold & their heirs that at and before the ensealing hereof I have good right full power & lawful authority to grant bargain sell convey & confirm the said demised premises in manner as aforesaid and that the said Rufus Smith William Buffum & George Ar nold & their heirs under & according to the trust before mention ed shall lawfully peaceably & quickly have hold & enjoy the said demised premises forever without any let hindrance or interrup tion of any person or persons whatsoever In witness whereof I have hereunto set my hand & seal the 27th day of the Sixth month in the year of our Lord one thousand seven hundred & ninety nine and of American Independence the twenty third Samuel Smith (LS) Hannah Smith Signed sealed & delivered in the presence of Douglas Marsh Edward his mark X Southwick The State of Rhodeisland and Providence Plantations Providence ss. On the 24th day of October AD 1799 In person appeared before me the Subscriber Samuel Smith the within signer & acknowledged the within written instru ment by him signed to be his voluntary act & deed hand [seal?] Attest Peleg Arnold, Justice of the Supreme Judicial Court Recd. Decr. 2, 1799. Enterd & examd. [?] Danl. Chase Regr.

Schematic Diagram of the Grants

This schematic is roughly to scale. Each grant is approximately a half acre. There is not enough information to determine the distance between the two starting landmarks, so the graphical representation of the relationship between the two parcels is subject to poetic license. 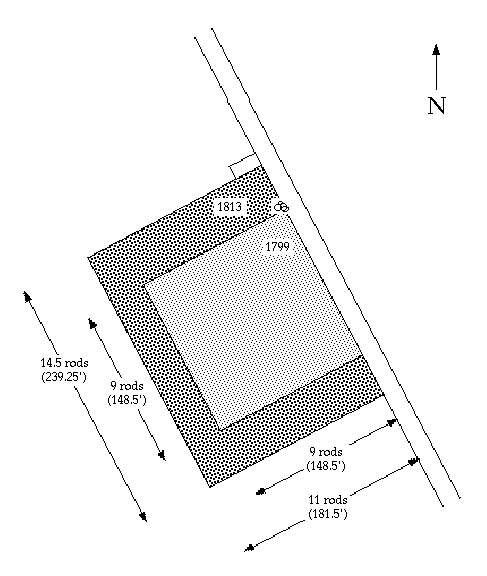