For what it's worth, what the article calls a census seems to Google better as "survey."

British History Online has an article which gives some background: 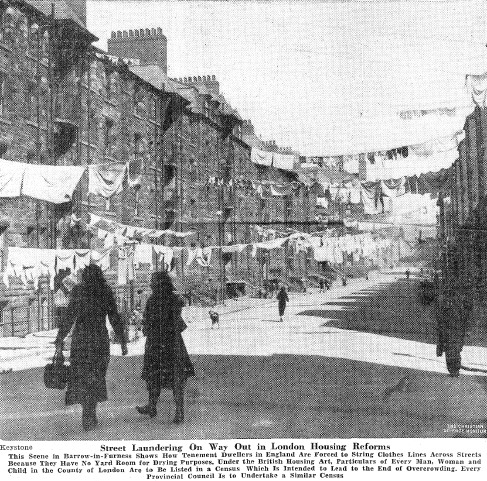 London Census Searches for Overcrowded Homes
Millions of residents can be consoled for invasion of privacy by knowledge that census method comes down from ancient times.

LONDON, Nov. 1—A census of overcrowding which is being taken in London today is another example of the growing use of this method in probing modern social problems in Britain.

But some of the millions of Londoners who today are patiently endeavoring to give satisfactory answers to this delving into their private affairs by the army of investigators might gain a little consolation from the fact that there is nothing new in the census system.

According to an official government report, the beginnings of the census lie far back in history. As early as 3800 B. C. the Babylonians had developed an efficient system of returns in connection with the control of their revenue. In Egypt, the building of the pyramids appears to have been responsible for the introduction of the census. Vast and constant supplies of man-power were necessary, and by 3050 B. C. a system of collecting statistics of available labor was in force.

In China, too, statistics of agriculture, industry and commerce were collected as far back as 3000 B. C. The Hebrew census was usually taken to discover the number of men able to fight, while ancient Greek and Roman statistics were largely concerned with status and citizenship.

The census appears to be essentially an instrument of civilization, for with the break-up of the Roman Empire it disappeared from history for the time being. In England inquiries for special purposes were made from time to time—Domesday Book, for example, was compiled by William I soon after his conquest of the country in 1066— but there was no national census until the year 1801.

A full census is now held in England every 10 years. Up to and including the census of 1901 the statistics were classified and totaled by hand, but in 1911 mechanical sorting, counting and adding machines were introduced, and have since been used exclusively.

But besides this national census every decade, Britain also carries out similar inquiries for specific purposes —such as a census of production, dealing with the state of the industries of Britain; the survey of London life and labor undertaken in 1928 under the direction of Sir Hubert Llewellyn Smith; and the presentday air survey. This is being started in the Midlands, at the instigation of the Ordnance Survey, and if successful, is likely to be extended to the rest of the country.

The census of overcrowding in the County of London which is being carried out today is required by Britain's new Housing Act. Particulars of every man, woman and child living in each house are being taken as a result of this door-to-door inquiry which is undertaken by the London borough councils in conjunction with the London County Council. The act also requires local authorities to make similar inquiries. A census of overcrowding is, therefore, to be undertaken by every provincial council in the country. The last overcrowding census, which was taken in 1931, showed approximately 106,444 overcrowded families living in London, occupying 218,156 rooms.