The topographical map is from TopoZone.

The aerial photograph is from MassGIS. According to the MassGIS description, "photography for the mainland was captured in April 2001 when deciduous trees were mostly bare and the ground was generally free of snow."

Reuben Carpenter and his Neighbors, 1798

Reuben Carpenter's farm was on the Providence road (now Mendon St.) at the eastern edge of Upton where it borders Milford (now Hopedale) and Mendon. This 1798 map shows Reuben's farm and his Upton neighbors. Across the street is Abner Palmer, for whom it's likely that Reuben's son Abner Palmer Carpenter was named.

Upton took stock of its physical resources in 1798. The town had 79 houses worth more than $100 and 27 worth under $100. The inventory revealed 1 building for tanning hides; 95 barns; 5 sawmills; 4 gristmills; 1 fulling mill; a place for treating and shrinking homespun cloth; 17 shops; 18 corn bins; 5 cider mills; and 8 outbuildings.

It is interesting to note that 6 persons owned 2 houses and that 1 owned 3 houses. Houses were usually small, averaging 800 square feet, about half the size of present-day modest homes. Only 24 of the 106 houses in town were two stories high. Every house was built of wood. Houses at this time had very small window space. Glass was difficult to come by and, in Colonial times, had to be imported from England.

As the eighteenth century came to a close, Upton was a typical Massachusetts community. Some citizens were beginning to acquire substantially more real and personal property than others. Amos Bradish, for instance, on Ridge Road, had a two-story house with 21 windows, comprising 100 square feet of glass valued at $475. Bradish's farm had 146 acres. This, with a barn 50 by 28 feet, and two shops, one 30 by 24 feet and the other 20 by 16 feet, were all valued at an additional $1,450.

David Chapin owned the house still standing at 19 Glen View Street. The two-story house has 24 windows with 184 square feet of glass and was valued at $700. This house, improved with modern facilities, was valued in 1981 at $60,000, indicating the tremendous depreciation money has undergone in the latter part of the twentieth century.

I computed that Reuben's farm comprised about 128 acres, which puts him into the high end of the distribution. It is not clear that this makes him inordinately, substantially, or even noticeably better off than his neighbors. The distribution is certainly quite different from the one we might imagine for a rural bedroom community today. 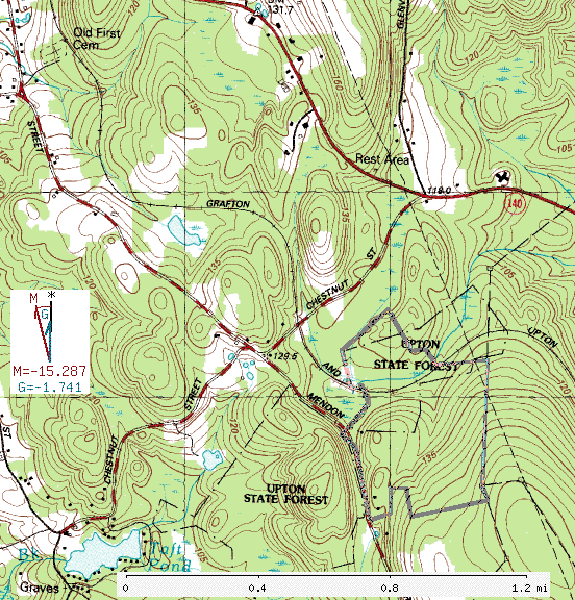 This 1982 topographical map shows that Reuben's farm was not flat. There's a definite hill, and the Grafton & Upton Railroad's right-of-way is careful to follow the contour lines. Part of the farm now belongs to Upton State Forest. 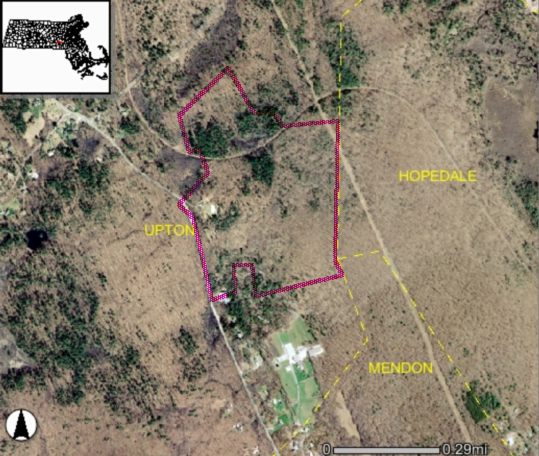 The Grafton & Upton roadbed and power line right-of-way can be seen clearly, and it's also apparent that the farm has reverted to an uncultivated state, and has not fallen prey to a yuppie scum real-estate development.