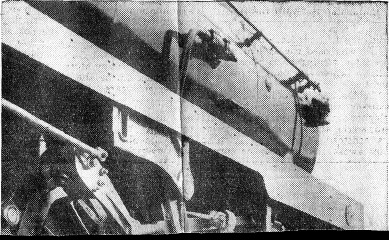 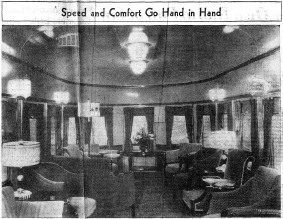 B. & O. Train Uses Rubber Like Auto For Easier Riding

NEW YORK, Nov. 1—"Rubber heels," together with some railway gadgets that hold coaches softly in line, help to make the Royal Blue, crack train of the Baltimore & Ohio Railroad, run as smoothly as any automobile, according to the company's engineers.

Down beneath the frame of each deep-blue car is a cushion designed to absorb shocks caused by fastening the train together, while a single patent coupler contains all pipes and apparatus required by the coaches.

Bumping Done Away With

The effect of these devices it was explained, is to make coupling possible in one operation. Passengers this [sic] escape the bumping experienced on many older trains.

Since all coaches are locked closely together, the entire train is able to start as a unit, and this was said to eliminate whatever jerks pass from car to car. "Rubber heels" are pads that prevent friction or rubbing on any underbearings of the coaches.

Modernized dining-car service ls one of many features pioneered by the new train between New York and Washtington [sic].

The kitchen has been placed in the center of the car, with tables for 32 persons at one end. On the other side is a curved lunch counter, seating 10 persons. Keeping the heavy kitchen at such a midpoint was said to provide smoother riding through equal distribution of weight.

Both steam and Diesel locomotives are being tested by the railroad to determine their relative advantages. The Royal Blue has been hauled by steam power since it began the run on June 24, but an 1800 horsepower Diesel-electric unit is now undertaking some trials before it is hooked on ahead of the modernized coaches.