REGISTRATION DISTRICT Oldham 1872 BIRTH in the Sub-district of Chadderton in the County of Lancaster No. 206 1. When and where born Twenty sixth April 1872 Springwood Chadderton 2. Name, if any Elizabeth 3. Sex Girl 4. Name and surname of father William Scanlon 5. Name, surname and Elizabeth Scanlon formerly Dillon maiden name of mother 6. Occupation of father Labourer at Chemical Works 7. Signature, description and X The mark of Elizabeth Scanlon Mother Springwood Chadderton residence of informant 8. When registered Fourteenth May 1872 9. Signature of registrar William Lord registrar 10. Name entered after --- registration

1863 Marriage solemnized at the Church of St. Mary and St. Boniface Cecil Street in the District of Plymouth in the County of Devon No. 43 When Married. Twenty Fifth January 1863 Name and Surname. William Scanlon Elizabeth Dillon Age. 32 years 30 years Condition. Bachelor Spinster Rank or Profession. Private 75 Regt. --- Residence at the time of Marriage. Raglan Barracks In Back of George Square Devonport Devonport Father's Name and Surname. Matthew Scanlon James Dillon (deceased) (deceased) Rank or Profession of Father. Chelsea Pensioner Labourer Married in the Church of St. Mary and St. Boniface according to the Rites and Ceremonies of the Roman Catholic Church, by me, Timothy A. Crowther Priest of the Eremite Order of St. Augustine. This marriage was solemnized between us, {William Scanlon / X The Mark of Elizabeth Dillon} in the Presence of us, {John Smith / Henry Alexis Ezechiel}

The funeral of Mrs. Bessie Scanlon So. Main st Dodgeville, was held this morning from her home. Burial was in Dodgeville.

As is not that unusual with the Sun, they got it half-right: she was buried in Central Falls. Still, it's interesting to see what passed for news ("Brockton Snowball in June--But Read!") and what the corrosive effects of 80 years of inflation have been. Here's an ad for Attleboro Ice Co. (still in business in 1999):

BUY YOUR COAL NOW Owing to transportation uncertainties prices for fuel will undoubtedly be unstable for the balance of the year, and we advise our customers to store their coal during the summer months. We fear that all fuel will be at a high premium next winter unless the public makes a special effort to store coal before that time. Buy now! Present cash prices per ton: Stove and Chestnut, $8.35; Egg, $8.10; Pea, $6.85 ATTLEBORO ICE COMPANY 71 PLEASANT ST.

Part of an ad for Shartenberg's of Pawtucket and New Haven (according to Cheryl, still in Pawtucket in the 1960s):

DRESS GOODS CLEARANCE Our advice is to buy now for the present and even for the distant future. The end of the advance in woolen prices is not yet in sight and any purchase at this time will surely prove to be wise.... Children's WHITE DRESSES Made of fine muslins, sheer lawns and dainty organdies, prettily trimmed with match- ed embroidery, laces and insertions. Sizes up to 15 years. Prices-- 98c, $1.48, $2.48, $2.98 and up to $8.98

1888 Marriage solemnized at Christ Church in the Parish of Bradford in the County of Lancaster No. 489 When Married. October 28 1888 Name and Surname. James Scanlon Louisa Legge Age. 22 22 Condition. Bachelor Spinster Rank or Profession. Hatter Weaver Residence at the time of Marriage. 23 Stewart St 15 Stewart St Father's Name and Surname. William Scanlon Herbert Legge Rank or Profession of Father. deceased gardener Married in the Parish Church according to the Rites and Ceremonies of the Established Church, by ______ or after  banns  by me, W. H. Crompton Curate. This marriage was solemnized between us, {James Scanlon / Louisa Legge} in the Presence of us, {James Chappell / Alice Bearce}

From the WPA-compiled "Index to New England Naturalization Petitions" and the final petition.

Maybe excellent is a little too rosy to describe an ocean crossing accompanied by a two-year old. They brought Henry Barlow, James' sister Lucy's son, over here to rejoin his parents, who evidently crossed earlier to case the joint. Up until now, family tradition had siblings James, Louisa, and Elizabeth all arriving together along with an unknown infant cousin, leaving their mother, Elizabeth, in England. A new mystery is why James is listed as a farmer.

The following is excerpted from the manifest of the Umbria, which arrived in New York 29 July 1889.

The James E. Blake Co. shop, Attleboro. Gramp is standing, center. Best guess for a date is the early 1920s. 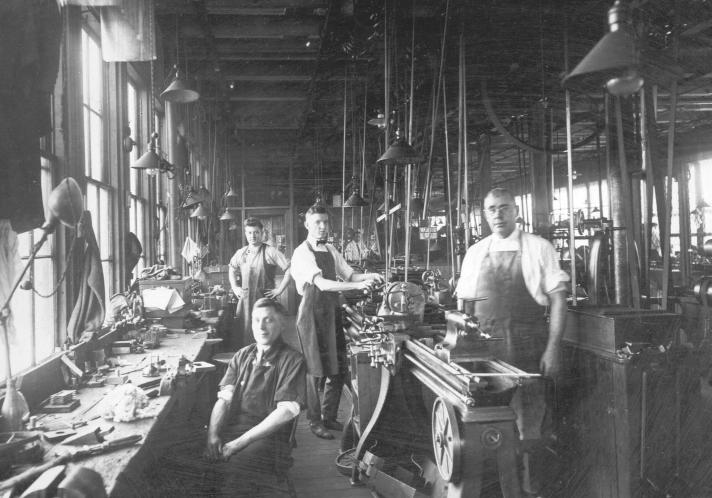 Below, Gramp is under the right arrow, the only man with a bow tie. It is likely that his father, James, is under the left arrow. 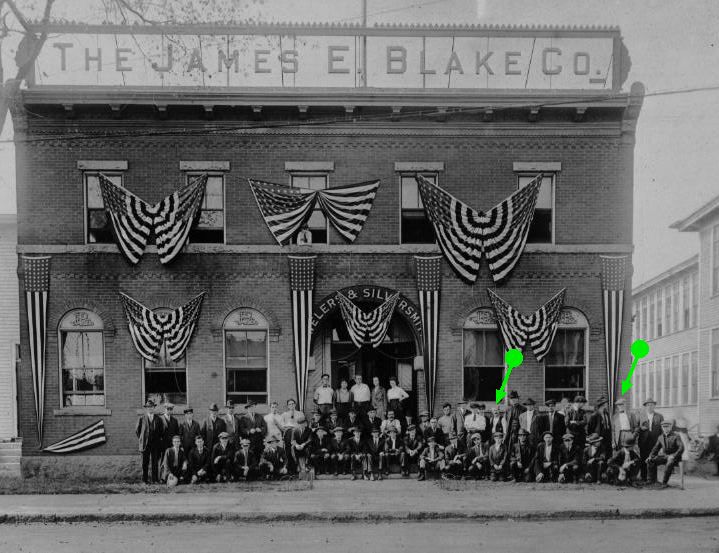 See products of the Blake Co. - representative or not I don't know - at International Match Safe Association and Museum and Don Bull's The Virtual Corkscrew Museum.